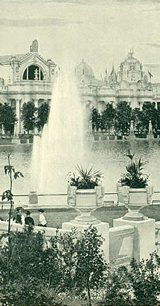 This is the homepage for The 1904 World's Fair Society, an organization of 1904 Fair enthusiasts.  If you have questions about the fair or its memorabilia, these are the people to contact.
Lee Gaskins has created a wonderful website - Meet Me in St. Louis: The 1904 World's Fair Web Site.
Scenes from the 1904 World's Fair
"The Greatest of Expositions Completely Illustrated" Stop by Kathryn C. Kuenzel's site to see her wonderful collection of lithographs, detailed information and extensive list of world's fair links.
The Official Guide to the Louisiana Purchase Exposition This was the only "Official Guide" to the exposition. It is an original 1904 book of 200 pages which have been digitized.  It contains an accurate and thorough survey of the World's Fairgrounds with detailed descriptions.
Meet Me at the Fair This is another very informative and well put together site about the 1904 Fair created by Bill Gamber and Ken Withers. It is really old, but still a fun look back.
The first American Olympics, held in 1904 in St. Louis, were a vigorous spectacle suited to an energetic and confident nation. The games were wrested away from rival city Chicago and appended to the Louisiana Purchase Exposition World's Fair.

You can read the whole book for free on Google books.

Explore a map of the 1904 World's Fair in St. Louis  The Missouri History Museum produced this overlay map in 1996 to show the locations of attractions at the World's Fair as they would appear today in and near Forest Park.
This site is a fantastic resource for those interested in World's Fair history, architecture and memorabilia. It contains an extensive, well organized set of links covering the last 150 years of international expositions, as well as what's coming in the future. If you would like to discuss your interests in World's Fairs, join their Yahoo discussion list.